Ensemble Collettivo Crisis is a group of composers and performers focused on music research and production in the fields of new music, improvisation and contemporary arts. They are active since 2012, based in Rovigo, in the north-east of Italy. The collective's core and founders are Pietro Frigato and Marco Bussi. Daniel Savio and Davide Rossato are members of the Crisis Ensemble 4et Project. Sigfried Pegoraro is a performer and guitarist of the Ensemble. The recent music production and research of Ensemble Collettivo Crisis investigates the unconscious formal paths and structures of free improvisation, and explores the concept of borders in music: sound/noise/silence, perception/non perception. The Ensemble is active in contemporary music composition as well, bringing improvisation in the score, deepening the idea of structuralism and expanding the possibilities of traditional instruments through live electronics and new technologies.

Born in Rovigo in 1988, fell in love with the electric guitar from a young age, and in the middle of a hard rock adolescence, he became passionate about research music thanks to the charismatic and inspiring guidance of Maestro Carlo De Pirro.
After graduating in clarinet at the conservatory "F.Venezze" in Rovigo (2009), he focused his studies in the search for a poetics and a personal musical language that combines his heterogeneous musical roots, finding a way in composition and improvisation.
He graduated in composition at the Conservatory of Rovigo in 2017 in the class of Andreina Costantini and Nicola Evangelisti.
He participated in numerous masterclasses with composers as Tristan Murail, Claudio Ambrosini, Azio Corghi, Andrea Agostini, Francesco La Licata, Paolo Aralla, Sonia Bo and many others.
In 2016 he studied composition at the "Hochschule fur musik und theatre" in Hamburg with Professor Xiaoyang Chen and free improvisation with Prof. Vlatko Kucan.
In 2012 he co-founded "Ensemble Collettivo Crisis", (www.crisisensemble.it) an incubator of projects concerning research music and new technologies and musical languages with a specific focus on improvisation.
In 2014 he created F:A:M: artistic musical forge, an educational project where teachers of a small village music school can research and develop personalized, non-standard, maieutic and innovative methods to teach music and improve the creativity and artistic freedom of the student and create an important musical background in the operational context.
Since 2017 he has been part of the impromptu.works improvisation ensemble in Hamburg with which he has joined musicians such as Barre Phillips, Vlatko Kucan, Massimo Falascone, Jean Charles Francois, Bill Egart, Livia Kavina and many others.
He is the artistic director of "Cataclisma Improvisation Festival", an event that brings improvised music to the province of Rovigo, his concert activity takes place mainly between Italy and Northern Europe, his compositions have been performed in Italy and abroad.
The release of the album "Live in Hamburg" with the quartet of Ensemble Colletivo Crisis under the label Setola di Maiale is scheduled soon.
www.pietrofrigato.com 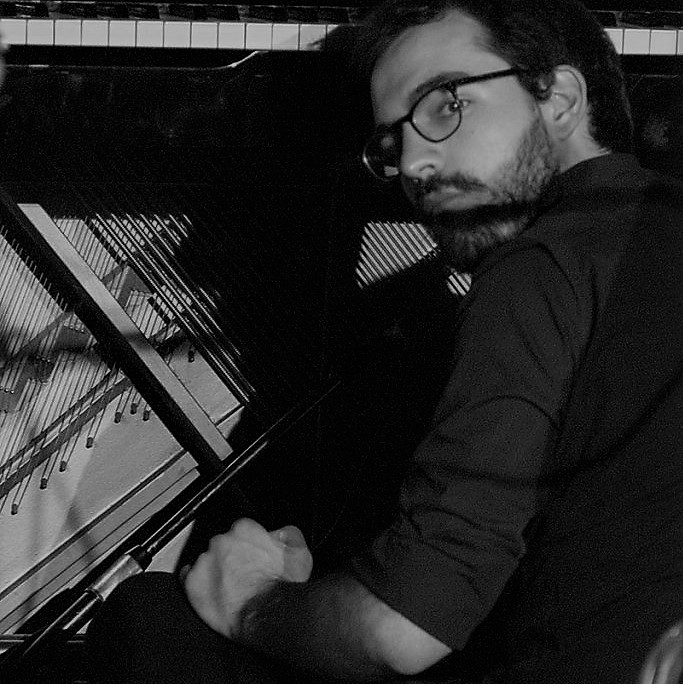 Musicolgist and pianist, Marco Bussi started playing piano at five. In 2012 he graduated at the Conservatory “F. Venezze” in Rovigo where he is currently studying Composition with professors Andreina Costantini and Nicola Evangelisti. In 2015 he gained a MA in Musicolgy at the University of Pavia. He is interested in musical disciplines at 360-degrees and he works mainly on Twentieth Century Music Theory and on Music Cognition. He attended several Composition Masterclasses held by Tristan Murail, Claudio Ambrosini, Andrea Agostini, Francesco La Licata, Sonia Bo, Francesco Pavan among others; and also Piano Masterclasses held by Alessandro Specchi, Pietro di Maria, Sven Brich. In 2015 he worked at the Music Cognition Lab at Queen Mary University of London. During this period, he collaborated with prof. Marcus Pearce at the implementation of computational model for Machine Learning. In 2012 he co-founded the “Ensemble Collettivo Crisis” formed by composers and musicians who practice collective composition, experimental improvisation and contemporary music research. His research is oriented mainly on electronic and electroacustic music as well as on the implementation of automatic procedures for composition and execution. He is also interested in human-machine interaction and in experimental improvisation as a way to establish archetypical procedures of music communication.

He began playing percussion at an early age, immediately demonstrating his predisposition and sensitivity towards music. He studied jazz in the conservatories of Venice and Rovigo where he graduated. Attracted immediately by free improvisation, research and art, he creates an extremely personal expressive style that welcomes every kind of sound and rhythm inextricably linked together by silence. Silence understood not only as absence of sound, but mirror of an inner dimension. he is the ambassador of Michelangelo Pistoletto's "Third Paradise". He played with: Otomo Yoshihide, Evan Parker, Massimo Falascone, Daniel Savio, Marco Bussi, Pietro Frigato, Davide Rinella, Bruno Romani etc. 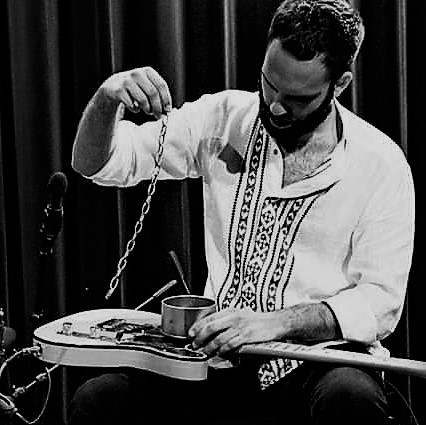 Electric guitar, electronics and objects player based in Venice, Italy, starts studying guitar at the age of 14 by himself. He graduated as guitar jazz player from the Conservatory of Venice in July 2016 by the guidance of Andrea Massaria, and now he is doing his jazz mastern with Roberto Cecchetto and Domenico Caliri. He deepened the study of classical harmony with Gianluca Mosca.
In the last five years, he takes part to several masterclasses with: Steve Lehman, Evan Parker, Andrea Massaria and Bruce Ditmas, Bebo Ferra, Ethan Iverson, Eddie Gomez and many others.
In 2015 he performed in the Cà Foscari Jazz Ensemble of Venice with Nicola Fazzini.
In 2016 he played in a classical guitars Ensemble, a tribute to Roland Dyens, under the guidance of Monica Paolini.
He played with “Tengo un' orchestra tanta Ensemble” (music by Frank Zappa) directed by Giovanni Mancuso.
In 2018 he played in “Venezze improvisation ensemble” with Vlatko Kucan and Massimo Falascone at the “Cataclisma improvisation Festival” in Rovigo.
He worked in the Theatre of Verona with actors, storytelling and improvisation.
He founded many projects: Ula Loop jazz trio, with original compositions and music by Bill Frisell and Paul Motian; The Poodles, a jazz rock duo formed by guitar and voice.
He recently played at London Oooh Festival, with a project called Polibobby, an improvisating duo born with the drummer Davide Rossato.
He is playing with the “Ensemble collettivo crisis” group.